In the summer of 1997, director Spike Lee went on a casting spree looking for his next group of actors to play the roles in his upcoming movie He Got Game. The role that would go to Ray Allen was originally offered to Kobe Bryant and Tracy McGrady before landing with Allen after he won an NBA championship with Seattle SuperSonics. Here is what happened when they tried out. 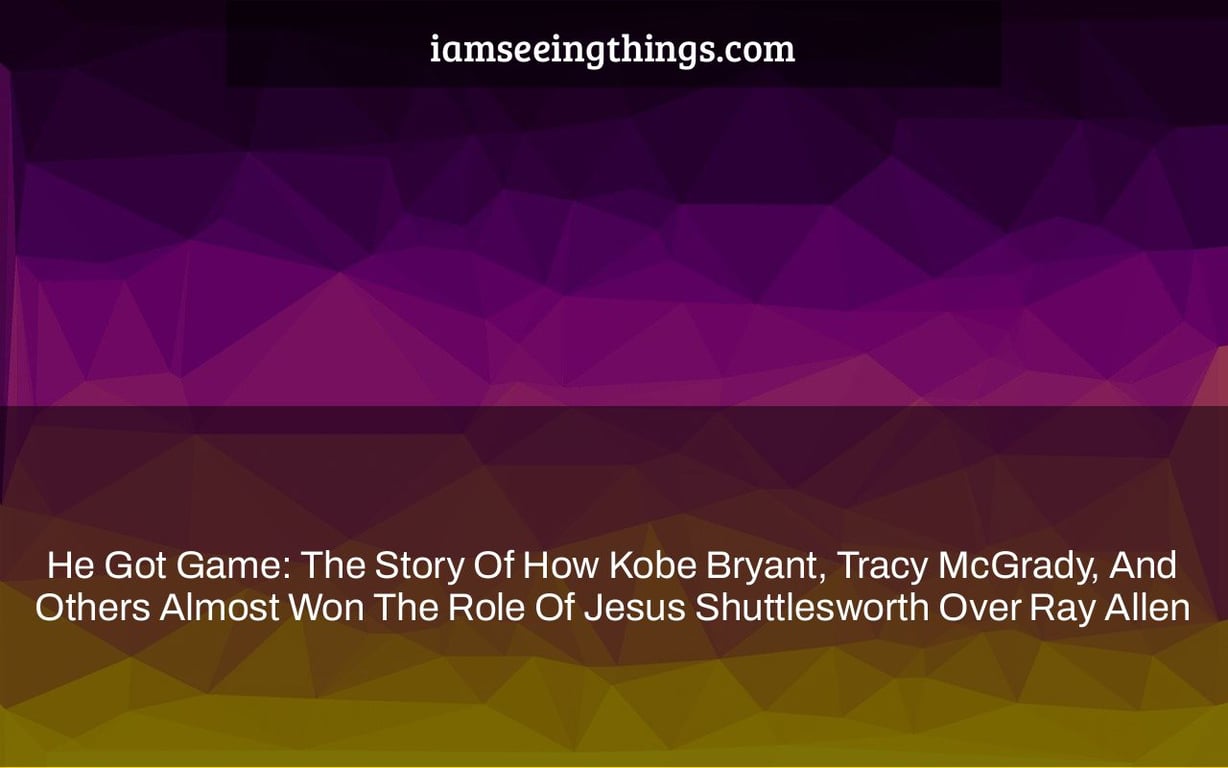 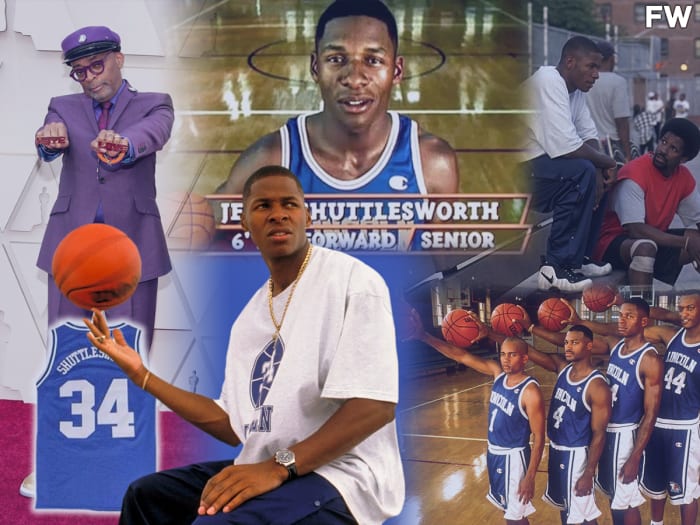 Spike Lee was a talented young filmmaker. His debut feature film, Do the Right Thing, released in 1989, placed him on the map as a director.

Lee was getting set to film his next feature, a narrative about the hardships of a top high school basketball player, by the time July 1997 came around.

He Got Game would be the title of the film, and Lee was looking for a genuine NBA player to portray the lead role.

The film’s primary character is a high school student named Jesus Shuttlesworth, who has a distinctive name. He aspires to be a professional athlete one day.

Shuttlesworth is a great high school talent, and elite institutions are showing interest in him.

Shuttlesworth is dealing with a family tragedy while attempting to determine which college to attend or if pursuing the NBA is the appropriate choice.

One day, Jake’s jail ward approaches him with an unexpected offer: he’ll grant Jake a week of release if he can persuade his kid to attend the governor’s alma mater, with the prospect of a reduced term if he succeeds.

The challenge of choosing the proper candidate arose after the tale was completed. Stephon Marbury was allegedly one of the individuals considered for the role.

Marbury has an odd claim to fame: he claims the Jesus Shuttlesworth persona is based on him.

This may not be a far-fetched assertion. Let’s make a comparison:

Marbury was a basketball player from Brooklyn’s Coney Island neighborhood.

He went to Abraham Lincoln High School and won the state title there. Marbury has emerged as the nation’s top prospect.

Marbury then had to choose between attending college or entering the NBA right away. He made the decision to attend college.

Then there’s Jesus Shuttlesworth, who hails from Coney Island’s Lincoln High School and, like Marbury, opts for college over the NBA.

“It’s quite evident who they were filming on,” Marbury stated. “It’s hardly rocket science to figure out that one.” On whom are you doing it? “Who else is there?”

In a 1998 interview with The New York Times, Spike Lee responded to Marbury’s charges.

“Even though Stephon, his father, and his siblings may believe this is the narrative of Stephon Marbury, it isn’t about them,” Lee said. “For a long time, basketball has been a big deal on Coney Island. And this isn’t a one-of-a-kind tale. It’s something that a lot of these kids go through.”

Tonya Lewis Lee, Lee’s wife, came up with the concept for He Got Game. For the first time since his successful film Jungle Fever in 1991, she pushed Lee to create an original script without the help of co-writers.

Marbury turned down the opportunity to audition for the part of Jesus Shuttlesworth.

Marbury said, “I simply didn’t feel like I needed to audition to be myself.” “Because I was aware that the film was about me.”

Since Marbury didn’t work out, Lee continued his hunt for his main man, finally settling on a name that would one day control the NBA… Kobe Bryant is a basketball player from Los Angeles, California.

Bryant seemed interested in the part at first, but then came the play that would define his career.

In the second round of the 1997 NBA playoffs, the Los Angeles Lakers were down 3-1 to the Utah Jazz.

The Lakers needed someone to come up and win Game 5 since it was tight at the end. Kobe Bryant, a rookie, was the player who stepped up.

Things did not go according to Bryant’s expectations. In the fourth quarter and overtime, he missed four shots. The game and series would be lost by the Lakers.

Bryant stated his decision to decline the assignment as “too much time.”

“When you consider actors and everything they go through, as well as the downtime that comes with it, it’s just too much.” I wanted to participate in a game of baseball. I planned to go to Venice Beach and play, but I ended up breaking my wrist there. I couldn’t sit still for very long. I wanted to train and work out all of the time. Coming out of high school, there was also a lot of expectation on me to do well… I needed to devote all of my energies to getting ready for the season. I didn’t have time to make a movie.”

After Bryant dropped out of the running, Lee had to find out who would be the best match for the character of Jesus Shuttlesworth.

Allen Iverson was brought in for a tryout, and Lee looked at him. Iverson “wasn’t prepared when he walked in for auditions and appeared unfocused,” according to Lee.

Tracey McGrady, a recent high school graduate, was also invited to audition. McGrady was thought to be “too restrained for the role.”

As a result, Lee and his team moved on to a number of additional names:

Some of these actors went on to portray other parts in the film, but none of them were a good match for Lee’s major character.

The Milwaukee Bucks then faced the New York Knicks on March 4, 1997.

In his normal courtside perch, Lee was present. He witnessed Ray Allen, a rookie, score 17 points, but more significantly, he recognized himself in Allen.

After the game, Lee approached Allen and said:

At first, Allen didn’t think much of the encounter:

“I provided him with my details… but wasn’t sure whether it would amount to anything.”

The Bucks didn’t make the playoffs that year, so Allen called Lee after the season ended:

“I want you to audition for the main part, but if you don’t get it, you could get [another] position in the movie,” he said. Allen remarked. “I told him I’d like to give it a go.”

Allen took part in two auditions and was not pleased with the results. He continued, saying:

“We were all joking around and rehearsing lines.” But I wasn’t sure whether I could live up to their expectations.”

Allen was asked back for a third audition, and this time he’d be reading alongside Denzel Washington, a great actor.

I was really taken aback. I, like Spike, sensed chemistry between the two of us.

Allen was cast in the role of Jesus Shuttlesworth, and He Got Game went on to become a basketball fan’s favorite film.

The Shuttlesworth persona would become legendary, and Allen would never forget him.

During the 2013-14 season, Allen wore the name “J. Shuttlesworth” on the back of his Miami Heat jersey for a few games.

Shaquille O’Neal, Reggie Miller, Charles Barkley, Bill Walton, and Michael Jordan, to mention a few, all had notable appearances in He Got Game. It also featured the new (at the time) Jordan 13s, but none of this compares to the film’s most remembered scene…

If you haven’t watched it yet, I strongly advise you to do so, and all that’s left to say is… enjoy.