Here are my picks for the 12 best video games of 2021. The next generation will be all about more powerful graphics, social experiences, and creativity-enabling gameplay that can’t be found in any other gaming device or console available on the market today. 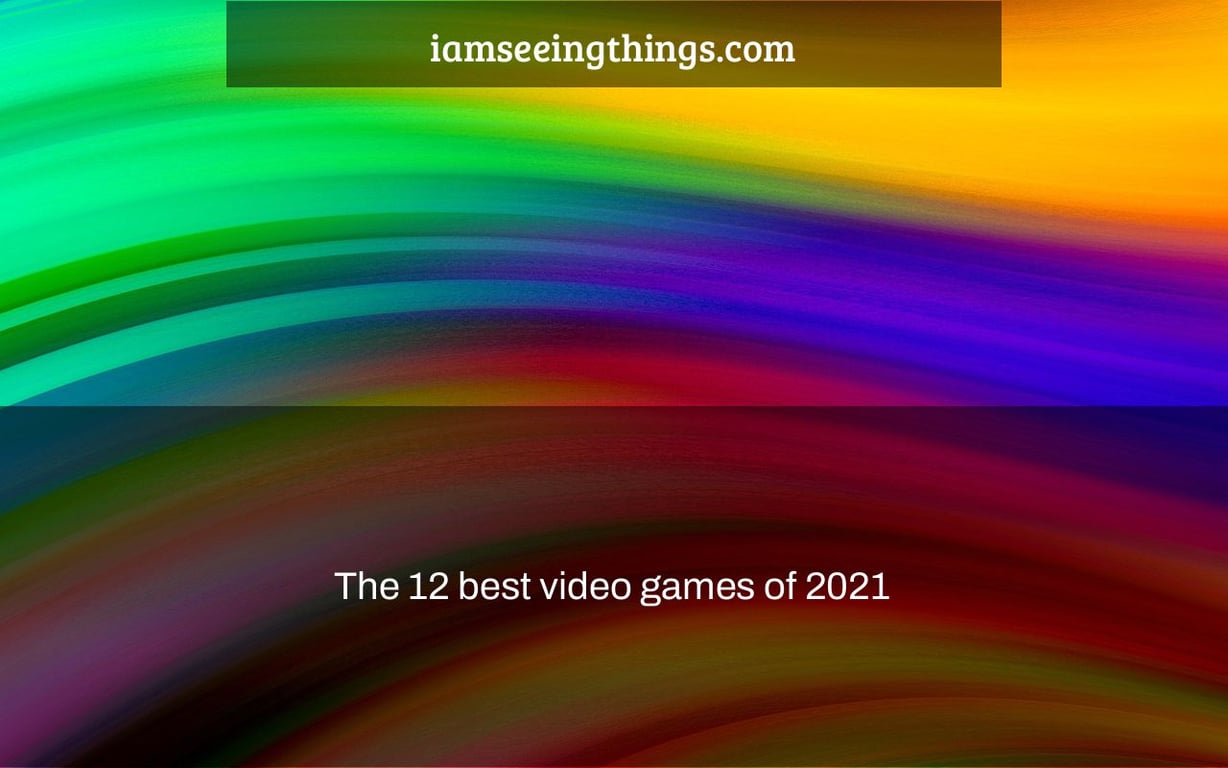 Even when certain portions of the globe begin to open up again, the year 2021 has provided us with plenty of excuses to remain indoors and play video games. Those who were fortunate enough to get a PS5 or Xbox Series X in the last year have been treated to some really next-gen experiences, while the Nintendo Switch has continued to receive outstanding exclusives. Whether you’re a die-hard PC gamer or prefer to play on an older console, there were plenty of terrific multiplatform games that had us tied to our sofas and laptops for weeks on end.

Now that we’ve put in the effort of playing numerous hours of video games this year, we’ve narrowed down our favorites. Many of these fantastic games are presently on sale or available as part of an Xbox Game Pass subscription, which is wonderful news for you. Here are the top games of 2021, whether you’re seeking to catch up during the holidays or need a last-minute present suggestion.

Deathloop takes Arkane Studios’ propensity for creating first-person action games that offer the player a lot of leeway to be as sly, clever, or straight-up scary as they want to the next level. This inventive time-loop shooter tasks you with eliminating a sequence of targets in a single day, resulting in a hilarious trial-and-error puzzle of addicting action in which you’ll learn — and ultimately acquire new powers — with each try. Whether you’re tactically creeping about or unleashing havoc with supernatural abilities, Deathloop’s gameplay is a fun, and the great performances by Jason E. Kelley (Colt Vahn) and Ozioma Akagha (Julianna Blake) will make you want to finish this time-travel mystery.

Forza Horizon 5 isn’t only a fantastic racing game; it’s also one of the greatest open-world games available. Sure, there are lots of entertaining races and tasks to complete, but what kept us hooked to the driving wheel was just motoring around Playground Games’ magnificent rendition of Mexico — and causing all sorts of damage in the process. Horizon 5 looks fantastic on PC, Xbox One, and the cloud, and its diverse range of cars and activities will keep even the most dedicated drivers occupied for weeks. Whether you like racing games or not, the new Forza Horizon is a stunning arcade playground that just about every gamer should play.

Halo Infinite finds the right mix between modernizing Microsoft’s flagship shooter franchise and reintroducing the basic elements that made it so remarkable in the first place. It would have made the list only for its free-to-play multiplayer, where we’ve spent endless hours owing to its deliciously tight gunplay and a fantastic sandbox of weapons and abilities that you can utilize in all sorts of inventive ways. You haven’t lived until you’ve used a grappling hook to steal a tank.

But Infinite’s campaign mode expands on that sandbox even more, giving you a large open world to explore while still telling a coherent, engaging tale that you’ll want to follow through to the conclusion. It’s large, ambitious, and takes some significant creative chances, all while bringing back the same feeling of delight and amazement we had when we first stepped into the initial Halo ring in 2001 — or when we lost our whole social lives to Halo multiplayer in the years that followed.

Resident Evil Village builds on the foundation laid by Resident Evil 7, which took Capcom’s survival horror genre back to its origins in every manner. This first-person thriller transports you to a stunningly haunted European town, which is divided into four separate areas, each of which seems like its own Resident Evil flavor. There’s the castle’s sheer gothic dread, the foundry’s steampunk tension, a spooky swamp, and a haunted home that provides one of Resident Evil’s most really horrifying moments. It’s all brought together with some of the franchise’s most gratifying action and puzzle-solving, as well as a plot so engrossing that we blasted through it in a weekend simply to know how it ended.

We weren’t expecting one of our favorite games of 2021 to be a remaster of a series we’d previously invested over 100 hours in, but here we are. Mass Effect Legendary Edition does an excellent job of adapting BioWare’s iconic sci-fi role-playing trilogy to current platforms, giving improved 4K visuals and some nice quality-of-life improvements without jeopardizing what makes these games so unique. It even makes the fighting in the original Mass Effect enjoyable to play! Mass Effect has memorable characters, excellent writing, exciting squad-based gameplay, and an interactive storyline that allows you to change the tale across three games. It’s one of the most important gaming series, and the Legendary Edition is the greatest way to enjoy it.

After last year’s mediocre Avengers game, we weren’t sure what to expect from Marvel’s Guardians of the Galaxy, but we were pleasantly delighted. Crystal Dynamics has created a fantastic adaptation of our beloved spacefaring band of misfits, combining spectacular superhero action with a fascinating and heartfelt plot that reminds us why we love these characters in the first place. We had a blast controlling the various talents of Gamora, Drax, Rocket, and Groot throughout both battle and puzzle-solving while zipping and blasting about as Star-Lord. But, like with every great Guardians tale, it’s the character interactions that make this one stand out. They’ll make you laugh out loud while also tugging at your emotions. It’s also quite beautiful, particularly on a PS5 or Xbox Series X.

The Medium was a pleasant surprise that we would not have found had it not been for the Xbox Game Pass introduction earlier this year. You must solve puzzles and evade dangerous adversaries while exploring both the actual world and the spirit realm — sometimes at the same time — in this imaginative horror adventure. The Medium’s capacity to simulate two whole game worlds at once is a genuine demonstration of what the PS5 and Xbox Series X are capable of, and its lighthearted pace and great plot are ideal for a scary weekend. The only issue we have with The Medium is the cliffhanger conclusion, so we’re hoping for more.

We’re not huge Metroid fans, so we largely used Metroid Dread to put the Nintendo Switch OLED to the test for our review. Dread is clearly one of our favorite games of the year now, only a few weeks later. The next Metroid game is a near-perfect 2D action experience, with exhilarating gunplay and movement, powerful and memorable boss encounters, and an ever-expanding labyrinth environment that beckons you to explore while while intelligently driving you towards your next goal. It’s one of the greatest Switch games ever, and a must-play for fans of the series as well as novices.

We’ve always struggled to get into Capcom’s famous but difficult-to-understand Monster Hunter series, but Rise is the one that ultimately hooked us. Exploring Monster Hunter’s vast areas has never been simpler or more enjoyable, owing to new features like a grappling hook and a cute new canine friend that make it much easier to travel about and jump into major monster encounters. The game’s 14 weapons, which range from gigantic swords to hybrid machine guns, are a thrill to use and master, and the traditional Monster Hunter cycle of slaughtering monsters and earning great gear is still as addicting as ever. Add in some of the series’ greatest graphics to date (even on the aged Nintendo Switch), and you’ve got the best starting point ever for this lasting action role-playing franchise.

Psychonauts 2 is one of the most enjoyable games of the year, even if we just consider it as a 3D platformer. The colorful, whimsical adventure from Double Fine gives you fascinating psychic skills and boasts some extremely imaginative level design that has you physically going inside people’s heads to solve puzzles and destroy bad characters. But it’s the later half of Psychonauts 2 that makes it so special: it’s a truly moving narrative about mental health that’s sandwiched between all of the amusing one-liners, stunning graphics, and gratifying platforming.

The PS5 already boasts a solid lineup of exclusives, but none of them do a better job of showcasing what Sony’s new platform is capable of than Ratchet & Clank: Rift Apart. The stunning, Pixar-inspired shooter-adventure from Insomniac is a genuine technological showcase, since you can jump between whole dimensions in an instant with no loading screens to break up the action. But the newest Ratchet & Clank game is more than just sleek 4K visuals and a nifty next-gen party trick – it’s also a wonderful 3D platformer with endearing characters, a variety of entertaining weaponry, and some of the series’ greatest narrative.

Splitgate has risen from relative obscurity to become one of the hottest first-person shooters available right now, making it one of our greatest gaming shocks of the year. It’s easy to understand why: this arena combat game expertly blends Halo’s firepower, Quake’s speed and agility, and the unique ability to build portals on the battlefield enabling all sorts of menacingly innovative strategies. We were hooked for life the first time we outsmarted an opponent by skillfully blasting them via a portal. Splitgate was initially purchased to tide us over until Halo Infinite was released, but its unique gameplay and regular updates will likely keep it in our rotation for a long time. Even better, it’s available for free on PlayStation, Xbox, and PC.

The “best games 2020” is a list of 12 games that are expected to be released in 2021. The list includes some already popular titles and others that are new, but will likely be big hits.